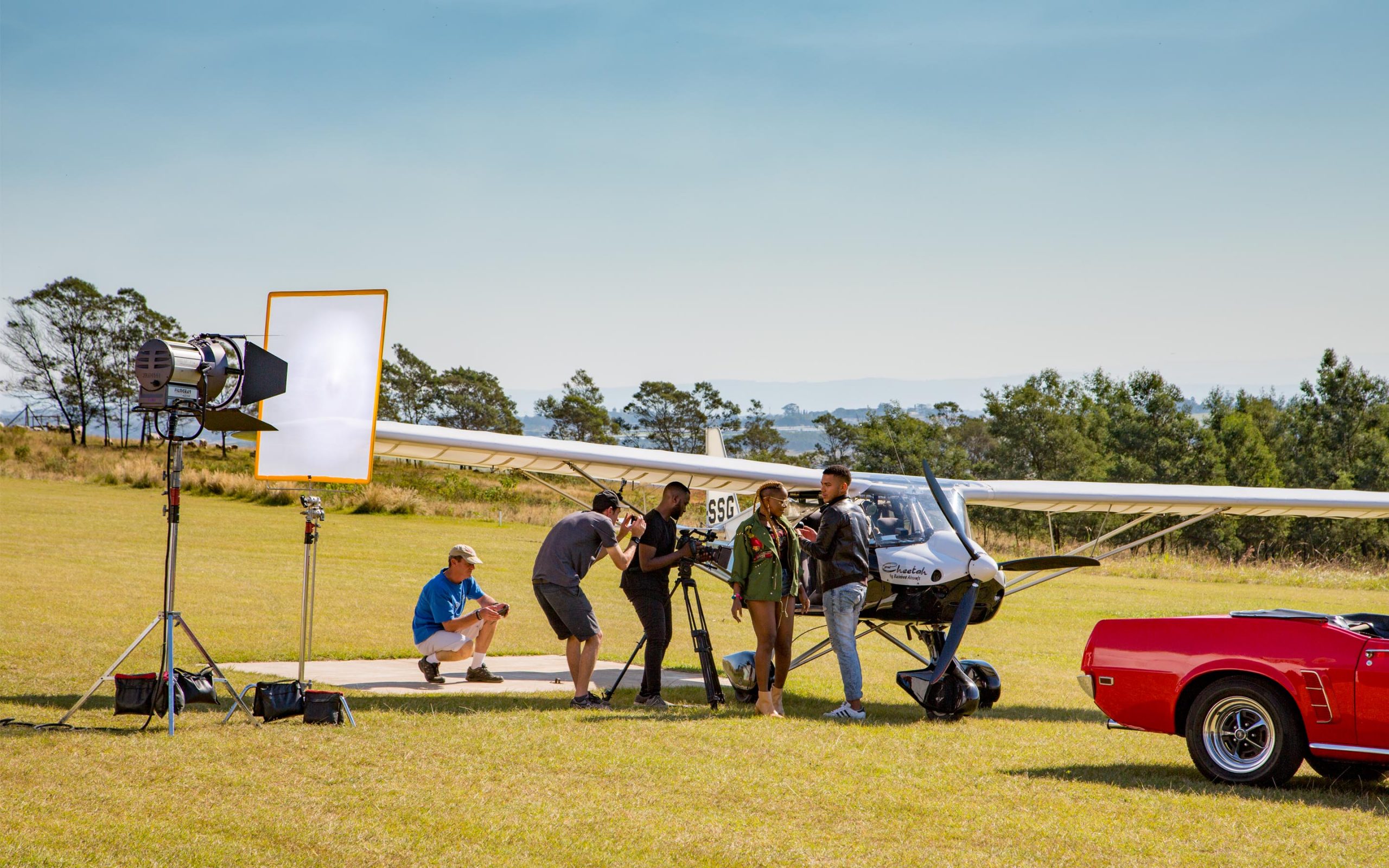 “Zanie Brown (born March 8th) is a Ugandan singer and song writer, born in Kampala (Uganda’s capital). Zanie Brown started singing at the age of 6 years in primary school. She first entered in the professional music industry in 2013 by recording her first song under the direction of her producer.” – www.zaniebrown.com

We met Zanie and her manager at our office in Durban on a Friday morning. After a thorough discussion, our brief was to capture a country side journey. Where Zanie and her man fly in, drive off in a good looking car, have a few pit stops along the way, and finally reach their cosy destination. As soon as the meeting ended, the OD Media team started sharing creative ideas and making storyboards, scouting the perfect locations, booking stylists and make up artists, finding fixed wing aircraft and fancy cars, making travel arrangements and finally putting plans into action. By the following Wednesday, filming had begun.

Day 1 of 3 saw an early start, with the OD Media team meeting at the crack of dawn at a small airstrip in Cato Ridge. Steve of Airserv was our pilot of choice and he was super excited for the morning’s antics. Zanie arrived with more than enough time to have her hair, make up and wardrobe change done before we started shooting. Tony James was the man in charge of Zanie’s make up, and my, what an excellent job he did! Scene 1 was shot at the end of the runway, which had endless panoramic views. From there, we made our way back to the hangars, where Dean and his dad were waiting with their brilliantly red Mustang. After a quick refreshment break, we began shooting the next scene with the Mustang. What fun! Zanie was driving up and down (all 20 meters of back and forth) while the guys (also known as Matt, Jaybe and Josh) were running around getting the perfect shot. By lunch time, we were happy with what was captured and moved off to the next location. We didn’t go far and spent the afternoon shooting various other scenes and backdrops, until we ended the day at a popular view point with even better vistas than what we saw at the beginning of the day.

Day 2 began with a long drive to Mooi River and beyond, literally. Matt scouted one of the most picturesque venues that filled the brief, and then some. When we arrived, there was much excitement. The area had everything we needed. Tony started straight away with Zanie’s makeup while we unpacked the vehicles and set up for the shoot. First stop, was on the water’s edge where some beautiful performance scenes were captured. Then we moved across to the woods- stunning in the day time, spooky in the dark… Thankfully the sun hadn’t set yet! With the warm orange sunlight finding it’s way through the tall trees, a fun and romantic scene unfolded before the cameras.  As the sun started to set, we jumped into the cars and made our way to slightly higher ground to ensure the sunset scenes and performances were captured as planned. The sun went down and it got cold, really cold. That didn’t stop Zanie though, as she donned her pink outfit, walked into the woods and comfortably performed yet another scene. Our final shot was a welcomed relief as we moved indoors, put a blanket around their shoulders and shot in front of a roaring fire.

Day 3 was our final day of shooting. We just had a few scenes to wrap up. After a mid morning meet at the office, we travelled in convoy up towards Hillcrest where we shot at a lovely park. We setup next to a small stream, where Tony did makeup (on a park bench) and Zanie got dressed in between open car doors where we held up a black sheet for some privacy. Sometimes you just need to make it work with what you have. Without an issue, Zanie walked down into the stream where the guys were ready to film, balanced on a rock and did her performance. This was one of her best! To end off 3 great days of filming, our final scene left everyone a little queezy. We were at a pretty high vantage point, with views that were out of this world, where one little slip, could have you falling a good 200 meters to the gorge floor below… But don’t fear, for we all made it out to tell the tale.

We are so fortunate to have so many incredible locations right on our doorstep! This was a great opportunity for the team to showcase what our province has to offer. We have no doubt this music video will be a huge success for Zanie, and we look forward to working with her again.

A local Ugandan news website, Big Eye, learned about Zanie shooting her new music video in South Africa, stating:”We have reliably learnt that Zanie is in South Africa shooting a video of her upcoming song You and I, according to the information we have, the singer has put on set prominent video directors in South Africa…” Follow this link to read the article and see a few behind the scenes photos. The Guys, also know as Jaybe, Matt and Josh (left to right)