Video Production | How to Edit a Documentary Remotely

Video Production | How to Edit a Documentary Remotely

I love a good story and when Michael Durban dropped me a link to his 5minute documentary “Paddling For Happiness” immediately he had me hooked. A great surf story about Martin Pollock who lost a few limbs in the army and most importantly it showcased how surfing changed Martin’s life and mental health. The 5minute documentary also did incredibly well picking up 12 film festival awards.

Remote working is the new buzz word of 2020 so I thought it is a good time to reflect on how we have done this before without even realizing it. Michael Durban, a good friend of mine who had worked with me before moving to the UK a few years ago, got hold of me suggesting he has enough footage to turn the 5minute documentary into a longer 20minute story. I couldn’t resist the chance to be part of telling a great story.

So how was this going to work?
With Ocean Driven Media here in South Africa and Michael Durban over in the United Kingdom? Pretty simple, we setup a remote workflow, and then Michael had to trust me to capture his vision for the story and craft it into reality through the edit. 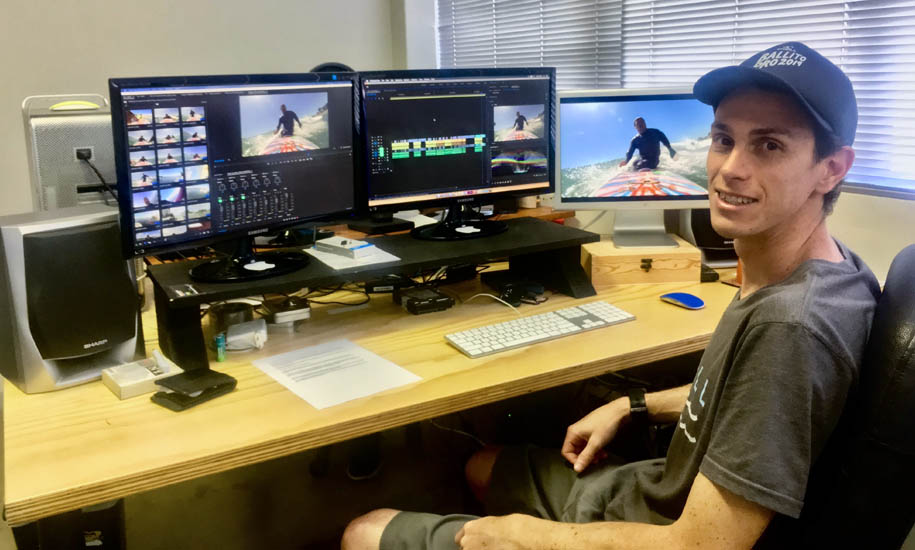 We started chatting on Skype, WhatsApp and Facetime with some of the WhatsApp voice notes exceeding 5minutes as we planned and chatted through ideas. Once we had a vision for the production the next step was transferring well over 100GB of footage to us here at OD Media in South Africa. Thankfully broadband and fiber access has developed in all the major cities in SA because a couple years back, as Mike can probably remember when he was still in SA, that downloading so much footage could take weeks on snail paced ADSL internet. The solution we found was super simple, using Adobe creative cloud we shared and synced footage back and forth. We even shared the premiere project files so if either of us opened the latest file, the footage could link locally on our systems and we could see any work done on previous edits.

The first part of compiling an edit with the story is the hardest, you have to create the basic cut and reference from the interviews, and decide how you are going to tell the story to keep the viewer hooked. At the same time you have to keep in mind what footage you have available to match the story you are telling. When editing I personally like to open with a hook that highlights a key part of the story early on, then take the viewer back to the beginning and build the story up. After the initial story edit was kind of locked in place, we needed to see what shots and footage we had available or what else we needed. Then Mike headed out to shoot some more footage in amongst his various other projects and busy schedule. 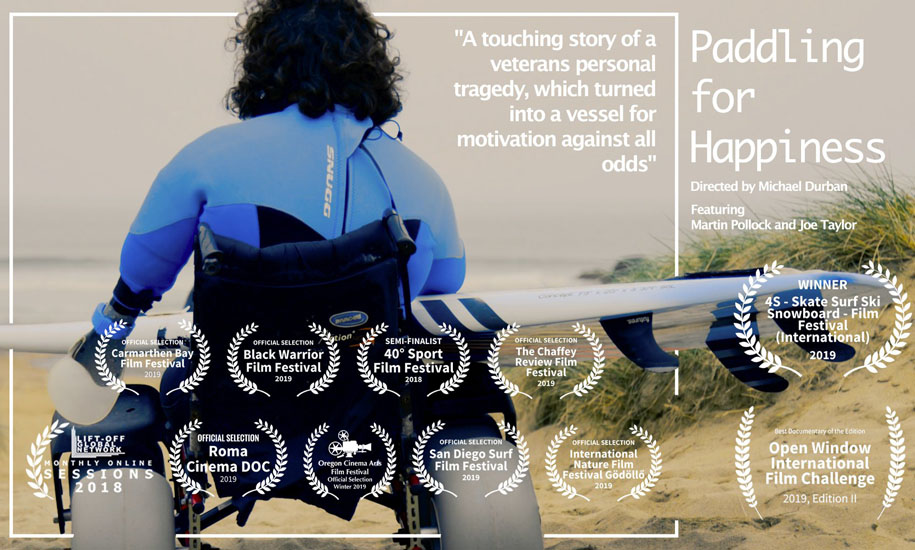 The many film festival awards Paddling for Happiness has received.

Even the editing was difficult at times to keep on top of with the busy schedule our team had. Traveling to various events throughout the year and filling up my passport with too many stamps and visas. I would always keep a copy of the edit with me on a hard drive because sometimes an idea comes to mind one day you want to work into the story, then it was just a matter of finding an hour to edit the idea in. Editing on a plane is a great way to make use of the time when the creative juices are flowing. Especially when you get bumped to business class.

Matt Video Editing on a business class flight to Kenya

What did we learn the most through our remote working setup?
I would definitely say that we learned communication and expectations are key. It was a long time before I could actually show Mike anything that resembled progress. I would attempt to explain my ideas of how I saw the edit unfolding from the direction he had given me without him being able to look at anything substantial. Once we got the first few drafts reviewed the process got easier and we fell into our groove, sending drafts back and forth. Mike would sit and make timecoded notes of changes for me, then we would chat about ideas and discuss our thoughts.

It also took a lot of trust from Mike to give me the direction and then step back to let us make it happen with our own unique input. Having an open mind from both of us made this easier too, we were happy to hear each other’s ideas.

Here is a bit about what Mike had to say on working together,
“By doing this I felt we showed a level of respect and trust for each others craft and subsequently our editing process and schedule through out the project went as smoothly as it could possibly have done so. By staying in contact for weekly updates we were able to ensure that the 20minute cut of the documentary transformed into something we are quite proud of today.” (Read Mike’s full blog here)

Finally we got to the point when it was all done, we could put the film online and share the longer story with the world. Hopefully the story is inspiring and shows how the mental and physical challenges life can throw at us can both be just as tough, but a little bit of surfing could be just what the doctor ordered.

Be sure to watch the full documentary below. Check out Durban Media in the UK to find out more about Michael Durban.

Family portraits taken over a fence